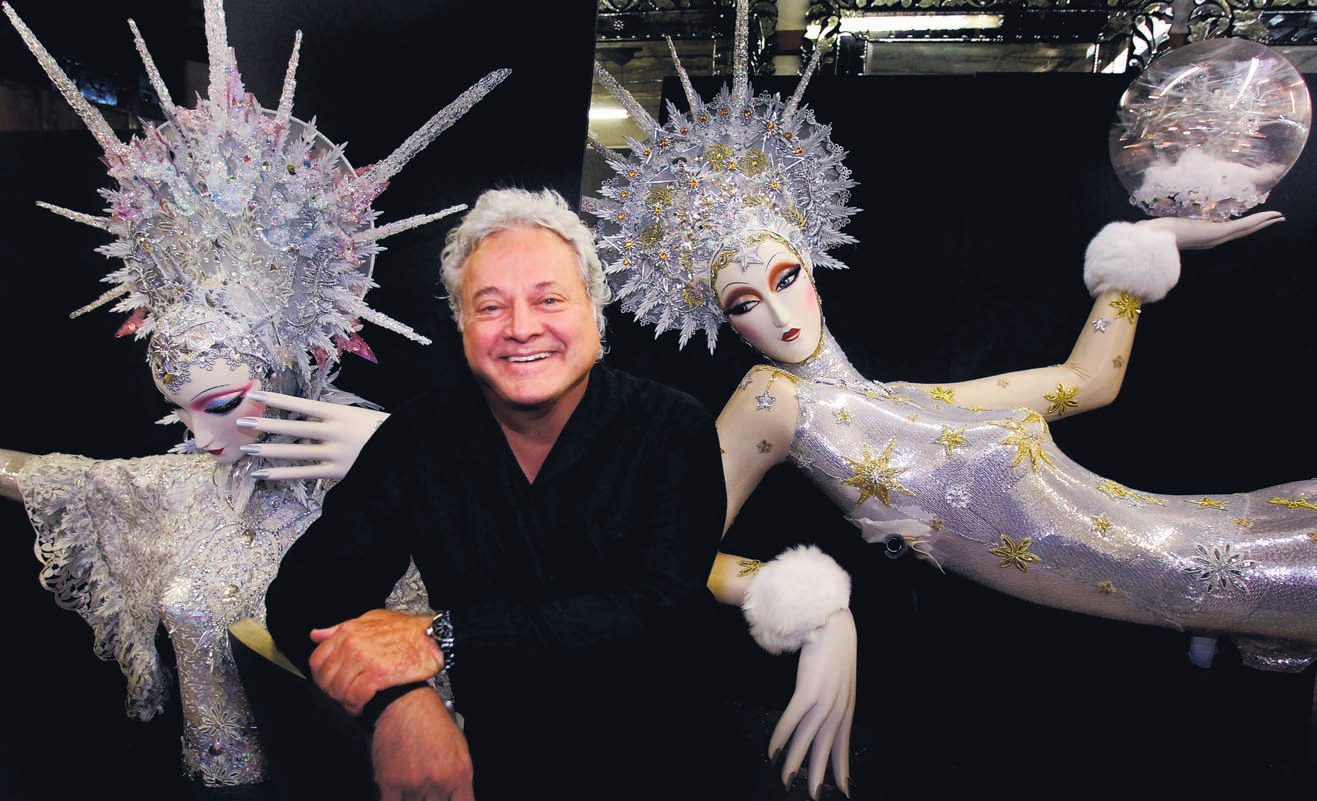 photos by JOHN WADS WORTH

Dallas designer things big when the holidays roll around

This weekend marks the official launch of the retail rush. But for Stephen Stefanou, the holidays are pretty much a fait accompli.

As of today, his monumental “props” — all made in Big D — have been deployed, assembled and staged in shopping malls, office complexes and resorts around the globe.

A six-story Christmas tree floats above the main atrium floor at the Gaylord National Resort in Maryland, and nearly 800 giant, twisting mobiles twirl kinetically from the ceiling at City Center’s glitzy retail mall in Las Vegas.

You might think that Stefanou (pronounced STEF-ahno) would be ready for a breather. But he’s not.

“I’m a stimulation junkie,” he says in his warehouse offices on Irving Boulevard.

Unless you’ve been in the market for something other-worldly, you’ve probably never heard of Stefanou or Venue Arts. His offices and plant are in the industrial area of Irving Boulevard and Motor Circle.

I wrote a column about him in 1994, but he’s never sought personal publicity. He prefers to be backstage, and he’s not part of the Dallas fete set.

“I live here because of the airport,” says Stefanou.

The 61-year-old is known for juggling two cellphones and a land line simultaneously, orchestrating the mute and hold keys with limited listener distraction.

“I don’t have the best memory, so I want to do it right now while I’m thinking about it,” he says.

His real estate company, Woodbine Development, knew about Venue Arts and put it into the competitive bid mix along with a half-dozen other companies. Stefanou and his team won out.

“Ray really gets down in the weeds on these types of things,” says Tom Meurer, senior vice president of Hunt Consolidated. “He knew exactly what he wanted.”

Four 12-foot toy soldiers were installed for their third Christmas on Friday, along with two gigantic wreaths. Two-story synthetic-glass “ice bursts” hang from ceilings in the lobby, and large, old-fashioned toys are on every floor.

Ocean Spray wanted something spectacular to launch its blueberry juice at an event sponsored by JetBlue Airways in June. Stefanou’s answer: a 38-foot-tall bottle of Ocean Spray Blueberry Juice that weighs 14 tons and moves on wheels.

“We designed and sculpted it here [at his plant on Motor Circle] with reinforced steel, erected it at JFK Airport, pulled it out of the hangar with a JetBlue plane pulling it,” Stefanou says. “By noon, it was on YouTube.”

“You had to blink your eyes a couple of times. ‘Am I really seeing this bottle?’ ” she recalls. “We moved it to downtown Manhattan to Greeley Square Park. To see the bottle in a New York City street setting, with skyscrapers in the background, created such an amazing contrast. We had a terrific response.”

Stefanou says he’s often inspired the moment he gets the assignment or sees the space. “I get it very clearly,” Stefanou says.

“Creativity comes through you, not from you. I think you’re a channel for creativity that’s out there.”

Stefanou keeps his company lean and has only eight full-time employees. During peak installation and dismantling times, he’ll have 100 contract workers, and he contracts with artisans and safety experts.

“Everything goes through structural, rigging, electrical and fire engineers,” Stefanou says. “We have to have all of that cover-your-butt expertise to make sure we don’t create a lawsuit, disturbance, a fire or anything that would bring negative publicity to the client.”

Five years ago, Stefanou hired an engineer from Boeing Corp. to help create huge California poppies out of synthetic glass for the Bellagio Resort and Casino in Las Vegas. “You don’t want real-glass daggers raining down on people,” Stefanou says. The project cost about $600,000.

Atypical project costs about $250,000, but one at the Olympics in Vancouver, British Columbia, this year cost $1.7 million.

Every project also goes through sensitivity and cultural screening. Stefanou learned his lesson when his Norman Rockwell-inspired, all-white male cadets debuted in Rockefeller Center in 1989.

“We got a lot of hate mail that year,” Stefanou says. “The next year, we recut and replaced the faces, put a bun on the back [of the girls] and created diversity. They’ve been wildly popular ever since.”

Barbara Buxton, Venue Arts’ marketing director, is amazed at how her boss calmly tackles challenges that would scare the pants off most mortals.

“His vision, no doubt, is a gift,” Buxton says. “When you couple that with his quiet resolve, the results are quite amazing.”

Stefanou, a native of Shreveport, La., came to Dallas in 1971, then answered a newspaper ad for a job spray-painting mannequins for a department store.

That led to making large-scale seasonal displays for department stores.

“At the time, Abraham & Straus in Brooklyn was spending $20,000 a window on bridal props,” says Stefanou, who commuted to New York to do the job. “We turned the whole main floor into the Ponte Vecchio for an Italian sales promotion.

“But that business ended with the death of the department stores.”

In 1976, Stefanou talked Zale Corp. into buying 12,000 inexpensive floral arrangements for its jewelry stores. “I literally rented a table, chair and space heater from Abbey Rents and a 10-by-20 you-store-it [space]. I sat in it round the clock making those bouquets.”

After that first job, he moved into bigger digs: two bays at a Grand Prairie filling station that had gone self-service.

He hired stay-at-home moms who were more adept at making artful things than he was. “They thought what I was doing was craft abuse,” Stefanou says. “They thought [the job] was fun as long as they could pick up their kids at 3 o’clock, go home to feed them and then come back and work that evening.”

His monumental business was born.

It was authenticated when the Rockefeller family hired him five years later. “My badge of courage is I’ve survived Rockefeller Center being sold five times.”

Venue Arts’ revenue this year is about $5 million, Stefanou says. The company is still profitable despite taking a licking in 2008, when the economy ravaged the hospitality industry and the Bellagio stopped buying new pieces.

The company made up the gap this year by extending its international reach, Stefanou says. “In my world, when one door closes, there’s always another one that opens.”

“The owner of that property really is very unhappy to be buying from an American source and having to pay freight to Europe,” Stefanou says. “He’s always grumbly because he’s perplexed that he can’t find it inEurope — even though he’s obviously looked.”

1251 Avenue of the Americas

Shiny red ornaments rest on a cascading pool at 1251 Avenue of the Americas across from Radio City Music Hall, as they have every holiday season for 22 years. “Every five years, we completely remake it,” Stephen Stefanou says. “Every five years, they want exactly the same thing.” 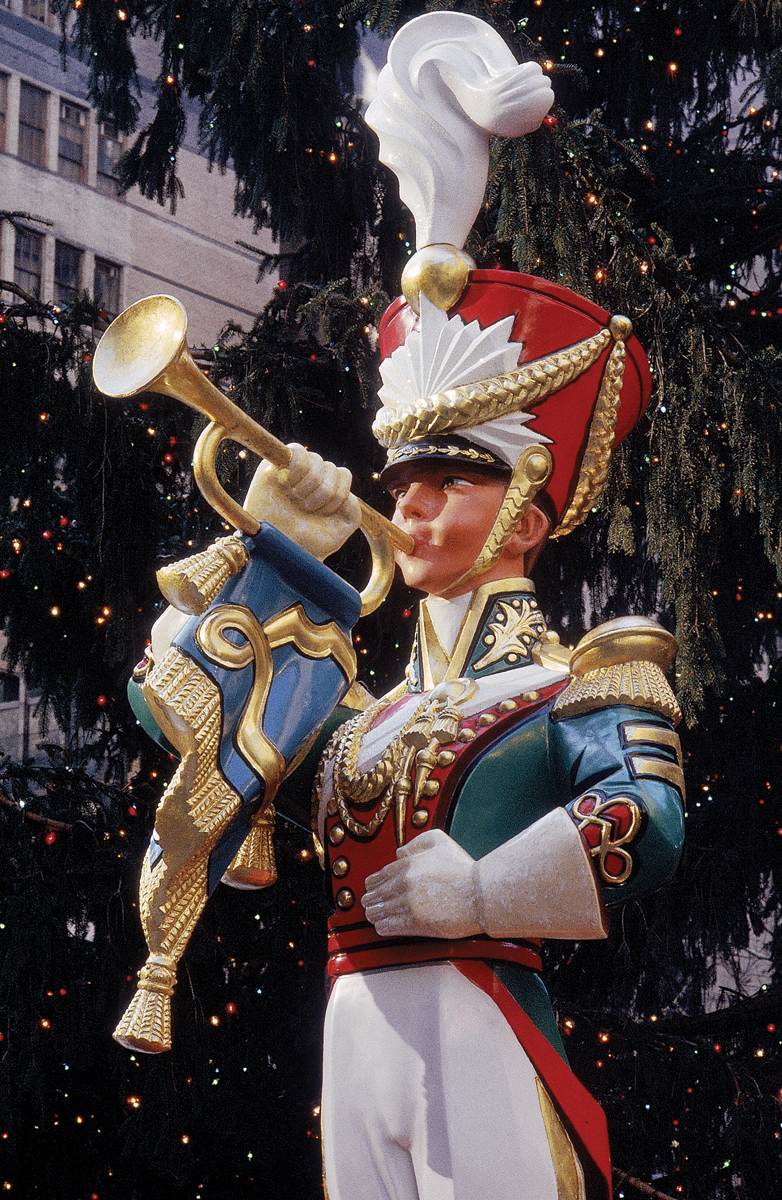 The 13-foot Norman Rockwell-inspired cadets debuted at the Rockefeller Center skating rink in 1989. Last year, the Manhattan complex’s insurer wanted assurance that if anything happened to the cadets, they could be replicated quickly. Stefanou made 3-D scans of the cadets and stored the digital images in a disaster-proof safe. 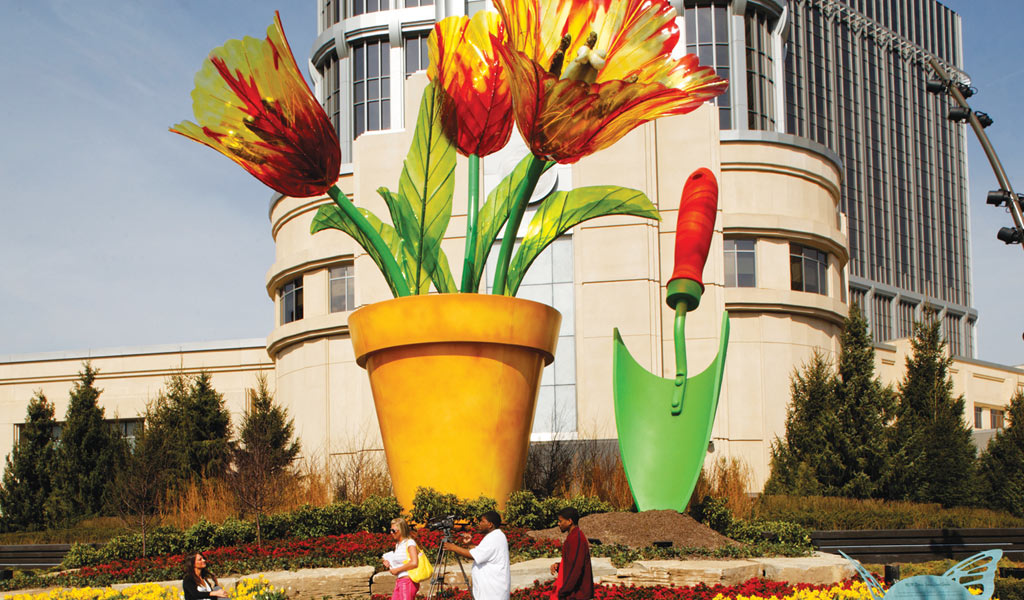 An 18-foot flower pot with 43-foot-tall synthetic-glass tulips and a 27-foot trowel were manufactured to withstand hurricane-force winds coming off Lake Michigan. 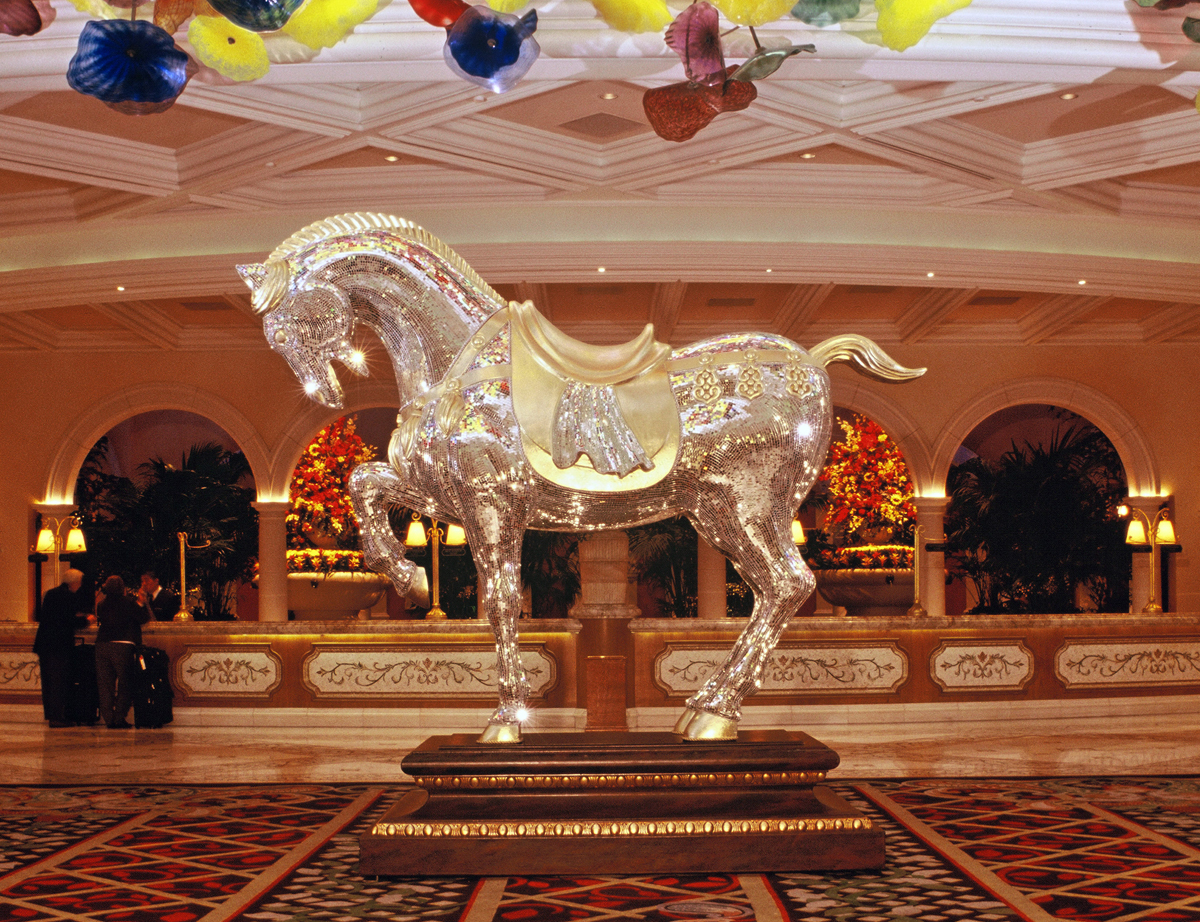 Given one week to make this 13-foot Tang Dynasty horse for the Bellagio Resort and Casino in Las Vegas, Stefanou borrowed a 13-inch, $3 million antique from a Minneapolis museum and sent it by armored truck to a nearby hospital for a CAT scan. The dimensions were sent to a plant in Florida, where a giant version was sculpted out of foam, cut in half, reinforced with steel, glued back together and driven to Dallas. “We had 14 people waiting on ladders here to gild and mirror it. It was still wet with white glue when we loaded it on the truck for Vegas,” Stefanou says.

This 38-foot Ocean Spray Blueberry bottle was made by Venue Arts in Dallas and erected in Manhattan’s Greeley Park to launch the new juice.

Venue Arts’ most expensive project ever was a $1.7 million Ocean Spray cranberry bog in the shape of the Olympic logo made for the 2010 Winter Games. The five rings, maple leaf and flame were filled with 13 million locally grown cranberries. Originally designed to float on the Fraser River and be viewed from a bridge, the project was grounded when warm weather and massive snowmelt created dangerous currents. Stefanou found a municipal park for its placement and rebuilt the bog in just four days. He leased a 1949 Ferris wheel so viewers would have a better vantage point. “Stephen is fantastic under pressure,” says Ocean Spray project manager Cindy Taccini. 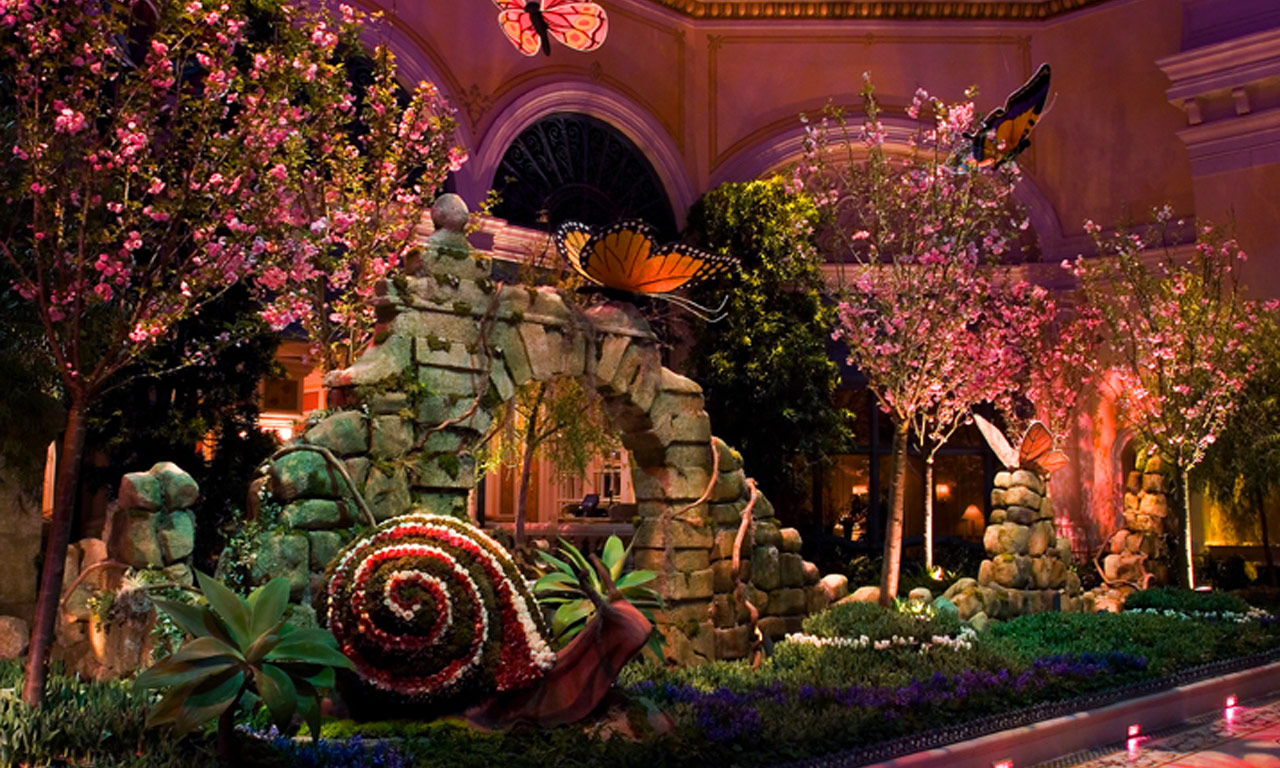 After learning that a 110-foot-tall, 200,000-pound canker-infected banyan tree in Palm Springs, Fla., was about to be turned into wood chips five years ago, Stefanou created a way to reuse it. He proposed thatAudra Danzak, then executive director of horticultural and floral at the Bellagio, use it as a prop for the resort’s Conservatory and Botanical Gardens. The infected top was lopped off and the healthy part cut into sections, mapped, numbered and trucked on 12 tractor-trailers to Las Vegas, where the 120-year-old tree was reconstructed. The project cost more than a million bucks, but Danzak says her boss figured the casino received more than twice that in free publicity. The Bellagio displayed the tree for about a year before it became too brittle. “It was a masterpiece,” says Danzak, now out on her own. “People still talk about it.”