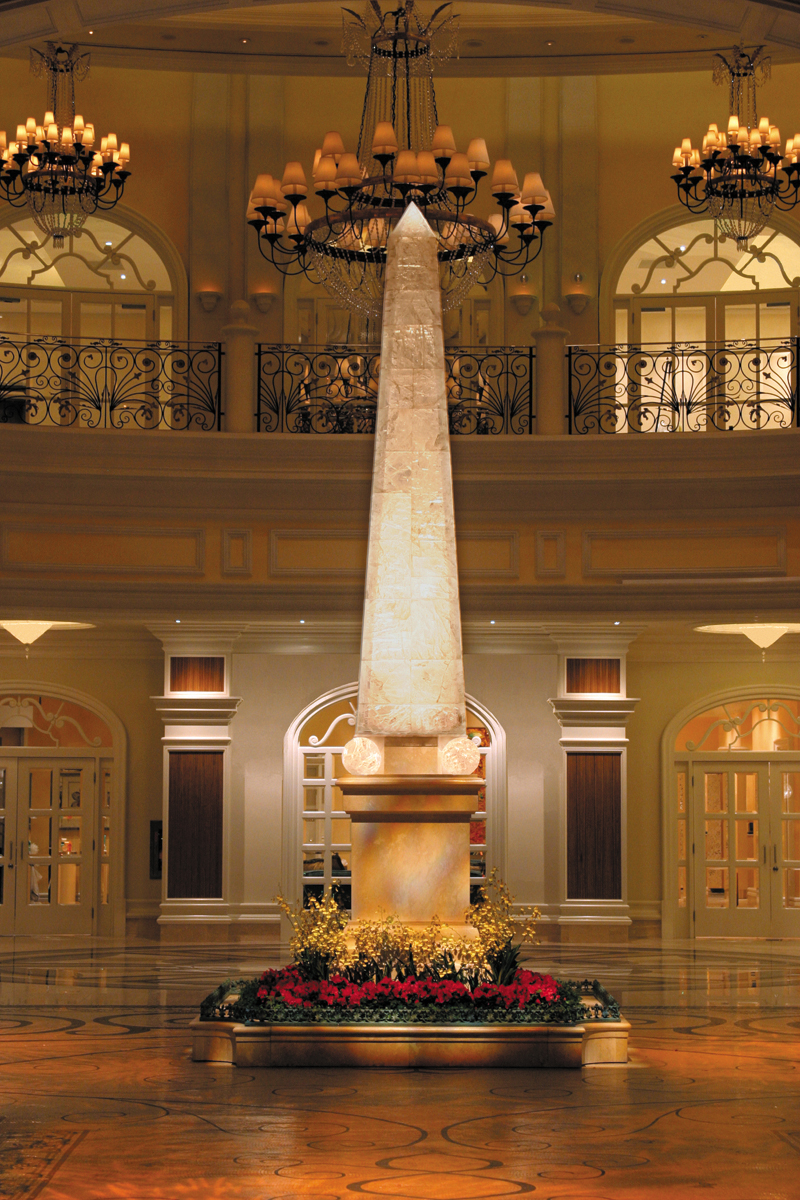 The Bellagio Resort and Casino unveils an 18-ft tall, two-ton, rock crystal obelisk …the only one of its kind in the world!

At the geneses of this project designer Stephen Stefanou enlisted the expertise of Dr. Keith Critchlow of the Royal College in London, the world’s leading expert in Sacred Geometry. “It was very important to me to employ Sacred Geometry in the design of this unique project” says Stefanou, designer of the crystal obelisk and Creative Director of Venue Arts in Dallas, TX, an international visual display company.

“Sacred geometry”, Stefanou noted, “is the ancient art and science which reveals the nature of our relationship to the cosmos.  For many the obelisk form, like the great pyramids, possesses a strange power, some believe even the key to life.   Historically, there has been a passionate attraction to this form by many…. the Masons, Napoleon and the Vatican all had a high regard for the obelisk.  Even our forefathers, as a tribute to the founder of our country, chose to erect an obelisk which we, of course, know as the Washington Monument.” Stefanou says.

Stefanou collaborated with world-renowned Zadora whose gemstone sculptures are compared to the work of Peter Carl Faberge.  Andreas von Zadora-Gerlof is the leading gemstone artist of our time who now leads a world-class workshop that makes everything form fine jewelry to large sculptures.  Zadora’s work is included in private collections throughout the United States, Canada, Europe, South America, the Middle and Far East.

An obelisk form, a slightly tapered quadrangular solid which tapers into a pointed pyramid top, is typically carved of stone.  “Bellagio wanted an exquisite icon for the new conservatory entrance.  We chose rock crystal because of its inherent luxurious qualities and because rock crystal is the only semi-precious gemstone that occurs large enough in nature to allow an architectural application.” Stefanou stated.

“In fact, we are currently working on other projects using crystal as the artistic medium.  One concept I am particularly excited about is a rock crystal winding staircase.  I think you are only seeing the beginning of rock crystal used in architectural design.”